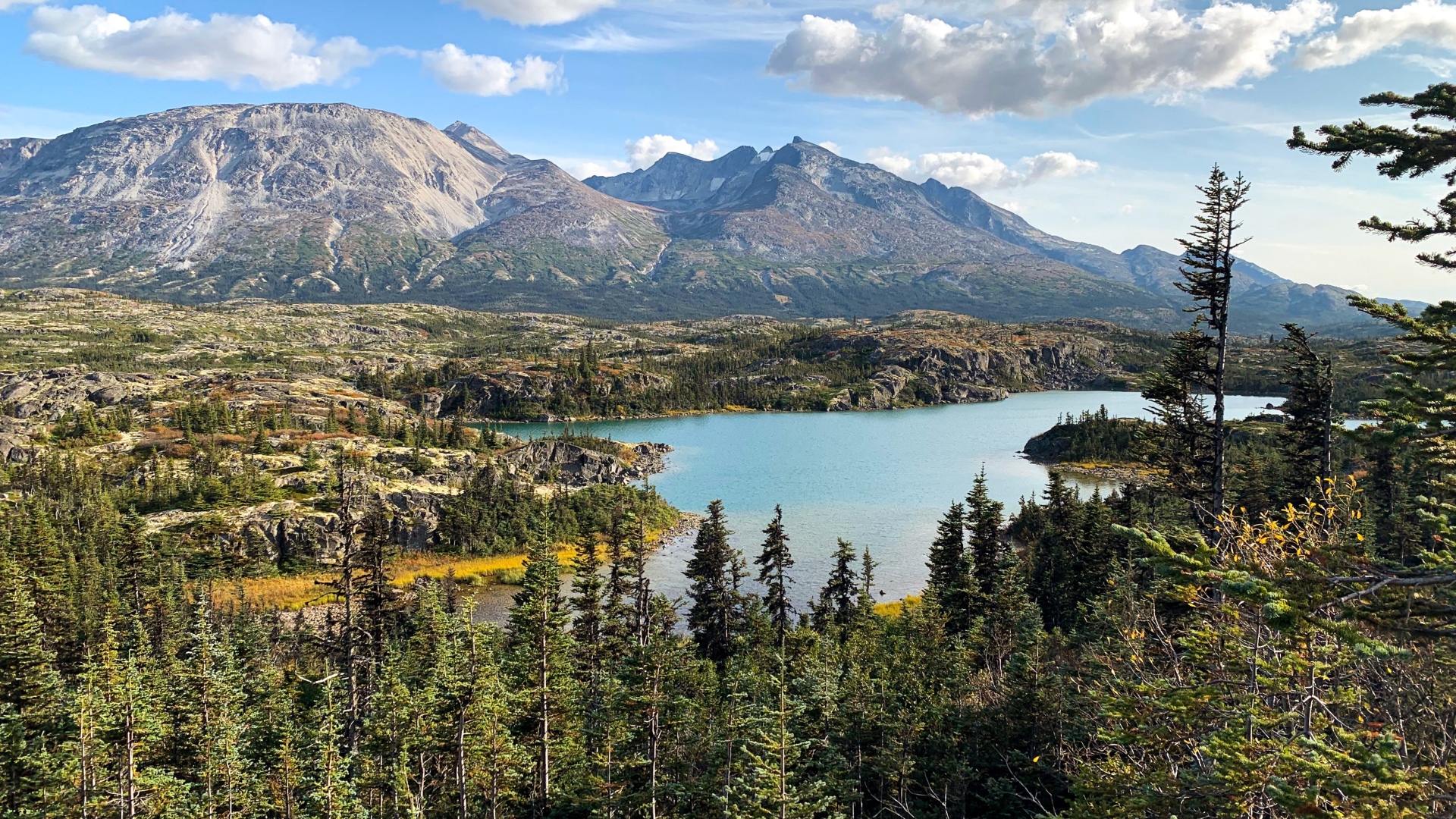 We recently had the great fortune of taking a cruise through the inside passage to Alaska out of Vancouver, Canada. (Pictures from the outbound sail are the subject of another post.). The furthest destination of the cruise was the town of Skagway, Alaska. We aren’t ones to participate in organized travel or excursions so we went on our own adventure.

As it turned out, Skagway was our favourite port of call! It is a small town with the greatest portion of its commercial district being dedicated to cruise passengers. The town’s population is less than 1000 permanent residents; however, there were a lot of seasonal employees who were preparing to return to their original homes once the cruise season ended in less than a month. According to one source, the town’s population doubles during the short cruise ship season in order to service the more than one million cruise ship passengers that come through the town. 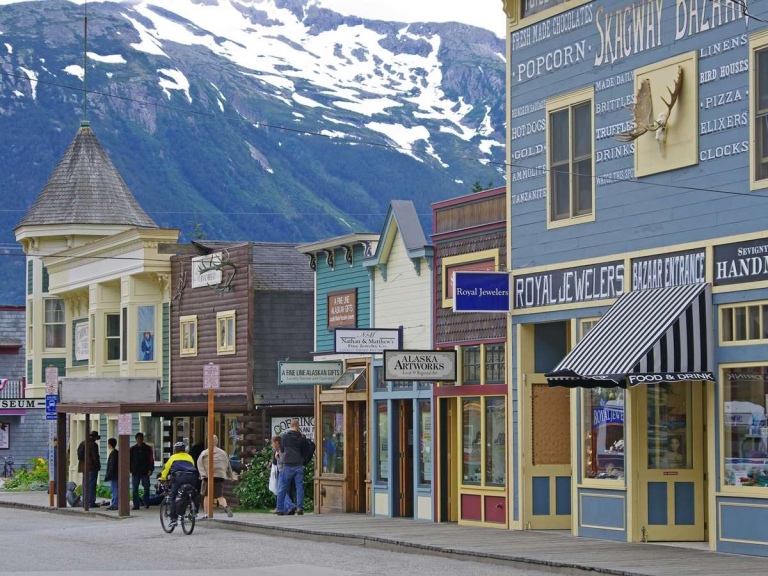 We walked around the town for about an hour and found two craft breweries. We sat and enjoyed the backyard beer garden of Klondike Brewing Company while we decided what we were going to do with the rest of our day, given that we had seen all of little Skagway. (I should note that I am not much of a shopper so going to shopping districts in ports doesn’t do anything for me.). We resolved to visit the other brewery before the end of the day.

I had a Hammerstone IPA (above) and Andre had a Whipsaw Spruce Ale.

Ultimately, we decided to rent a vehicle and go for a drive through the surrounding countryside. There were no car rental companies in Skagway; however, you can rent a Jeep from Alaska Green Tours for self-guided tours. Our decision to rent a vehicle was pretty spontaneous so we only had the vehicle for half the day. The company was good enough to charge us a reduced fee because the day was half gone by the time we figured out what we wanted to do. Their customer service was great and I highly recommend them to anyone who would be interested in doing their own self-guided tour of the area. The guidebook that came with the vehicle was invaluable. Without it, we would have missed so many beautiful spots that were not immediately obvious from the highway. I should note that we have received no compensation in any form from Alaska Green Tours. In fact, I don’t even imagine they know this blog exists! But that doesn’t change the fact they come with our highest recommendations.

Andre at the helm of our beast of burden for the day. (If you look closely at the bumper over the front wheel, you will see his sunglasses that he sat down when he had to sign the rental contract! Needless to say, they weren’t there after we pulled out!)

With the limited time we had, we decided to drive to Emerald Lake, Yukon. This would take us on the Klondike Highway from Skagway, through Northern British Columbia and into the Yukon Territories. We decided to drive straight through to Emerald Lake and then take our time coming back. We felt this would allow us to best manage the time available for this trip. We could get a sense of what we wanted to spend additional time seeing on the way back by seeing it on first on the way out. We didn’t want to take too much time up front and then have to rush back to board the ship. It turned out to be good logic; however, we weren’t on the road for more than 5 minutes when we had to stop to take a picture… although, I wasn’t going to get out of the vehicle to do so!

It’s a terrible picture but I was trying to take a picture of a mother bear with two cubs while hanging out the window of a vehicle still on the road without attracting her attention. The last thing I wanted to do was to draw her out on to the road. Nor did I want her to come to us for food. The more afraid she is of humans, the better. A habituated bear is soon to be a dead bear. So I took my picture while making as much noise as possible. Once I got this shot with my iPhone, I started to bang on the side of the vehicle to scare her away. I probably should have checked to see I had the shot before I tried to shoo her away from the road.

We continued on our way, crossing the border back into our beloved Canada. We drove straight through to Emerald Lake, took some pictures and started back. Emerald Lake was lovely but true to form for a tourist point, we didn’t find it particularly engaging. It was definitely pretty but not particularly inspiring… probably because it’s hard to be inspired by such a beautiful scene with a privately owned house perched in the middle. (I cropped it out from the right side of the photo). 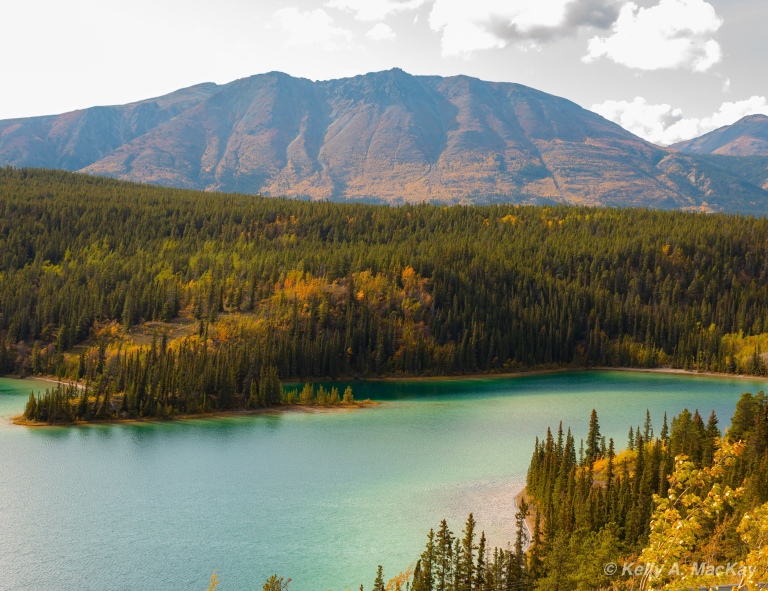 This was our turn around point. Now we could really take our time to investigate the scenery on the way back,

We discovered the incredible Tormented Valley, located in a narrow strip of northern BC that separates Alaska and The Yukon. I could have taken a thousand pictures before leaving. It was beyond beautiful. Here are a few but I may eventually do a post of nothing but pictures from this area. 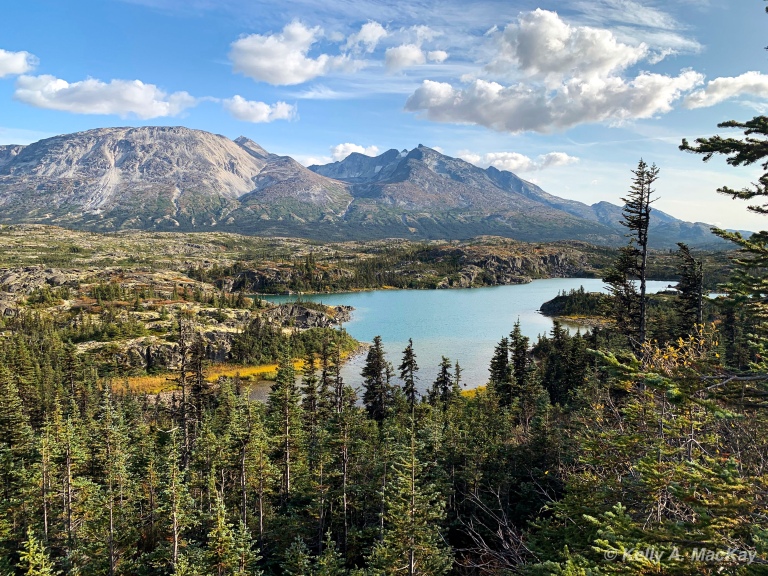 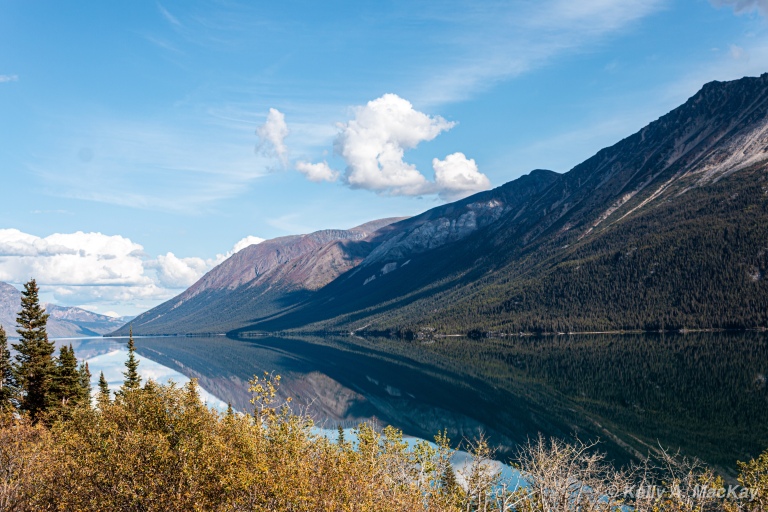 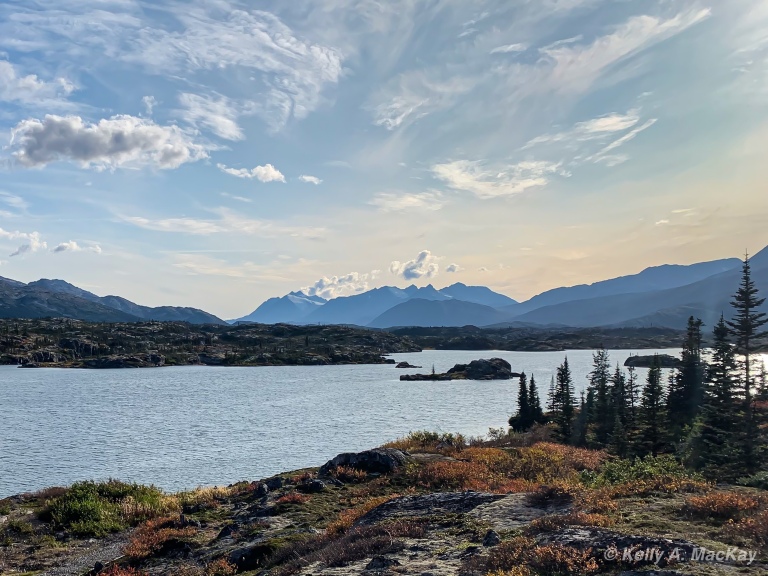 The best part of knowing exactly how much time we had to get back to Skagway was being able to stop and hike off the beaten path a bit in order to take pictures. I had to work a bit to take these pictures. There was no path and the terrain was tough at times. Thanks to the guidebook that came with the Jeep, we were able to scout out a Territorial Campground as well as some amazing locations for boondocking. Our one day in the area was enough to convince us that we definitely will want to go back with our RV to really explore the region in depth.

We would soon be running out of time to refuel the vehicle, return it to the rental location and grab our second craft beer so we continued back, knowing full well that we will someday return. After returning the vehicle, we made our way to Skagway Brewing Company where we enjoyed another really good brew. Unfortunately, we didn’t have time to get food but the menu looked great… just another reason for us to return by road in the future!

Overall, we genuinely enjoyed Skagway, not as a town or a cruise terminal, but a gateway to an incredibly beautiful area of North America. One day is definitely not enough for anything but to create an appetite for more. We will definitely be back.