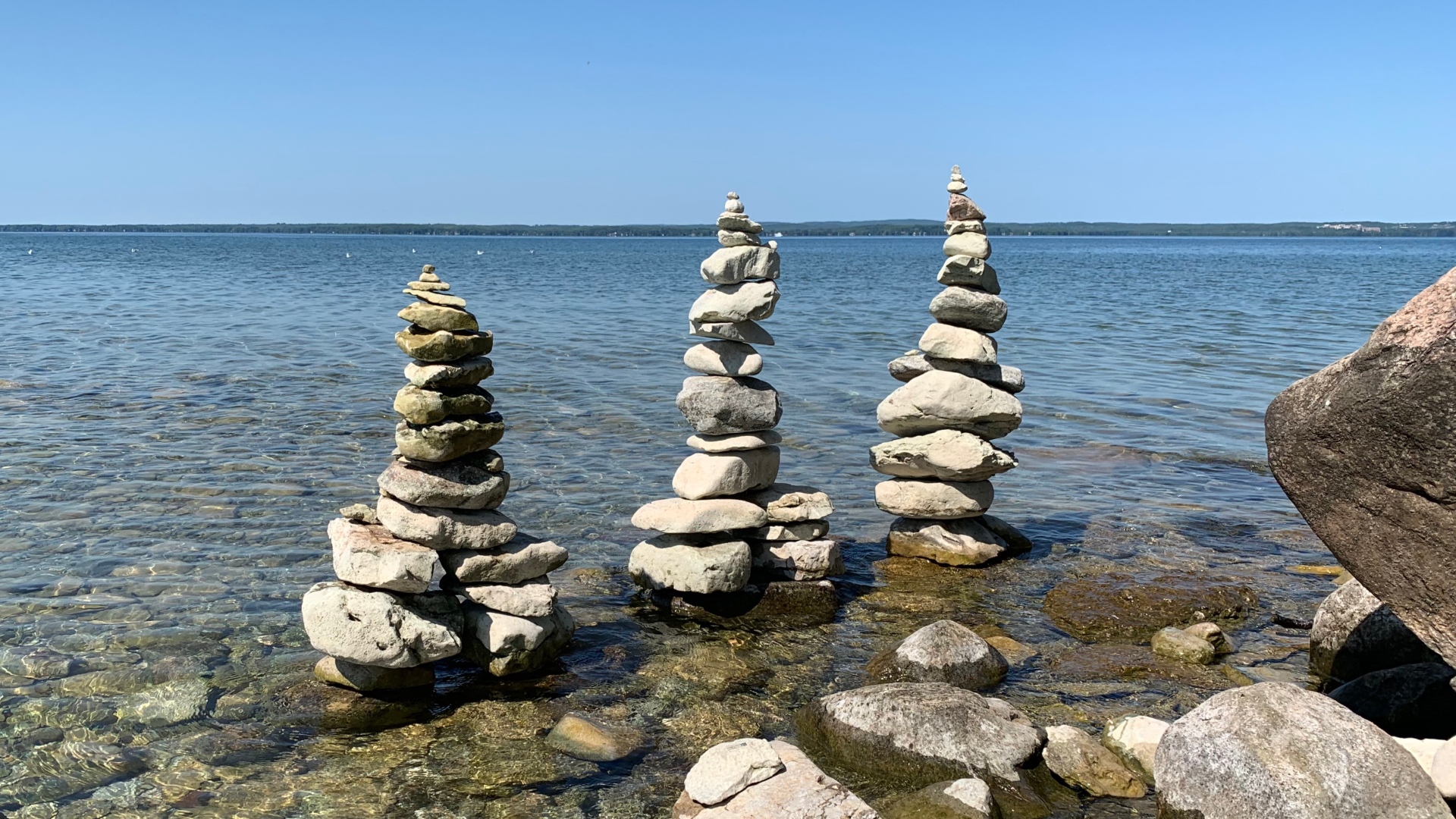 We are spending this weekend at McRae Provincial Park which is located on Lake Simcoe, near Orillia. We are in the North Campground, site #98 (marked with a red dot).

There are only two campgrounds here: north and south. We are in the North campground, the largest of the two. It is basically a groomed field with large trees lining the roads. It is clearly intended for trailers and RVs but there are a lot of tents here as well. There is very little privacy but I suspect the people coming to this campground are here to socialize. Almost every site around us is filled by groups who are occupying multiple sites to be together. It was really quite lovely to see just about every possible ethnicity represented here this weekend, with huge family groups enjoying campfires and sprawling feasts!

Overall, the sites are reasonably sized. It would be perfect if we were here with the whole brood but, being here by ourselves, it seems far more cramped and busy than what we would normally prefer.

Arrival:We spent the night before at a vineyard in Prince Edward county so it will be hard to beat that experience! The drive from the vineyard to the Park took us 2.5-3.0 hours. It was mostly 401 and particularly boring. Check-in upon arrival was fine. Pretty much standard for all provincial parks. Despite it being a long weekend and arriving at 16h30, it didn’t take very long. The front gate/office doubles as a park store. There isn’t much there but that is probably because they are so close to Orillia.

For the first time ever at a Provincial Park, we experience a real delay at the sanitation station. Overall, the sanitation point was good. It had a proper nozzle for black tank flush. (We had to dump upon arrival because we had been without service since leaving home.) The fresh water fill was a bit of a problem but that could absolutely been because of operator error. There were three vehicles in front of us when we pulled in and it took forever. The first two vehicles felt there was a problem with the hose but frankly I think they didn’t turn the hose on far enough. It was pretty sticky but once it was fully turned it didn’t take very long to fill our tank. The line up for dumping when we left was equally long.

Set-up: There were no issues with set-up. We arrived before 17h00 so there was tons of light. When I booked the site 5 months ago, I anticipated we would be arriving late so I booked a pull-thrust site so it was very easy to get in to and it was really quite level. Set up was quick. We found that the park is quite small so nothing is ever very far away. We have a water point very close by in one direction and a flush toilet and shower even closer in the opposite direction. Andre’s shower review of that shower (one stall within the bathroom) is 8/10. It hit all the high points for him: a hot and cold tap that doesn’t turn itself off automatically, a floor mat, adjustable water temperature and very good water pressure. The facilities are a bit dated but it is in good repair and was clean. I should note that it is not the main wash facility. The main ablution station is a little further away.

Meals:Friday night we had a pan-seared salmon with lemon butter sauce and salad. It was delicious and definitely something we would want to eat again!

Saturday breakfast was muffins and coffee. We had jalapeño poppers as a late afternoon snack, made with jalapeños from my own garden. They were super yummy and I would definitely make them again. Sam Sifton from the NYTimes cooking app for the win… again! 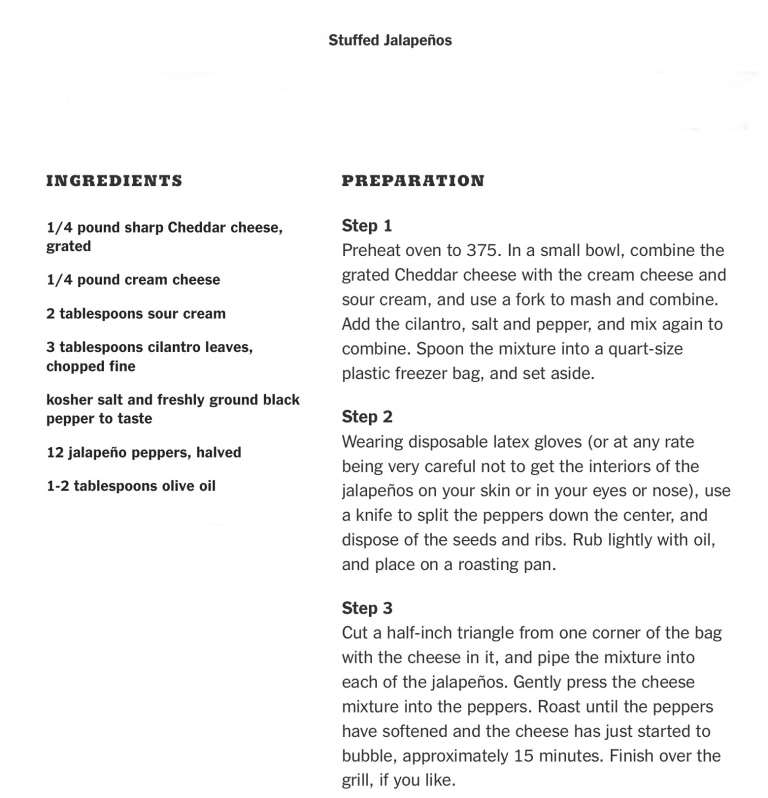 For dinner on Sunday night, I made Lemon Chicken Piccata (https://www.jocooks.com/recipes/lemon-chicken-piccata/#wprm-recipe-container-14059) with a Caesar Salad. I made my own dressing without a recipe so I have no idea as to proportions. I will have to pay more attention next time so I can capture it here.

Observations: The park staff is quite diligent about enforcing noise rules. There was a campsite about 100m away from us that was quite loud. An above middle aged drunk white dude was trying to sing along to loud country music while dancing with some female (who I much early observed wandering through the campground drinking wine). They were loud and obnoxious. We saw the park staff come visit once but the dude blew them off. They returned later and as far as I can tell, he was issued a ticket. There was no noise from that site after that! Overall, the campground was quite quiet at night. Staff did foot patrols during both the day and night. There was little to no noise after dark and the first stirrings came just before 07h00 from a campsite of 10 kids (boys and girls) camping with their dads. Those kids were up super early and the dads looked seriously tired!!

Gear review: Once again, the screen tent has proved to be a great purchase. It sets up in a flash and can be moved around with relative ease. And when I say flash, I mean 45 second set up. No exaggeration. 45 seconds

We put a large camping mat underneath and set up our furniture. It is just like having an outdoor living room but without the bugs. The dogs especially like it because they can sit ‘outdoors’ without having to be on a lead.

There are several walking trails in the park. We followed one along the shore line. It was really lovely. 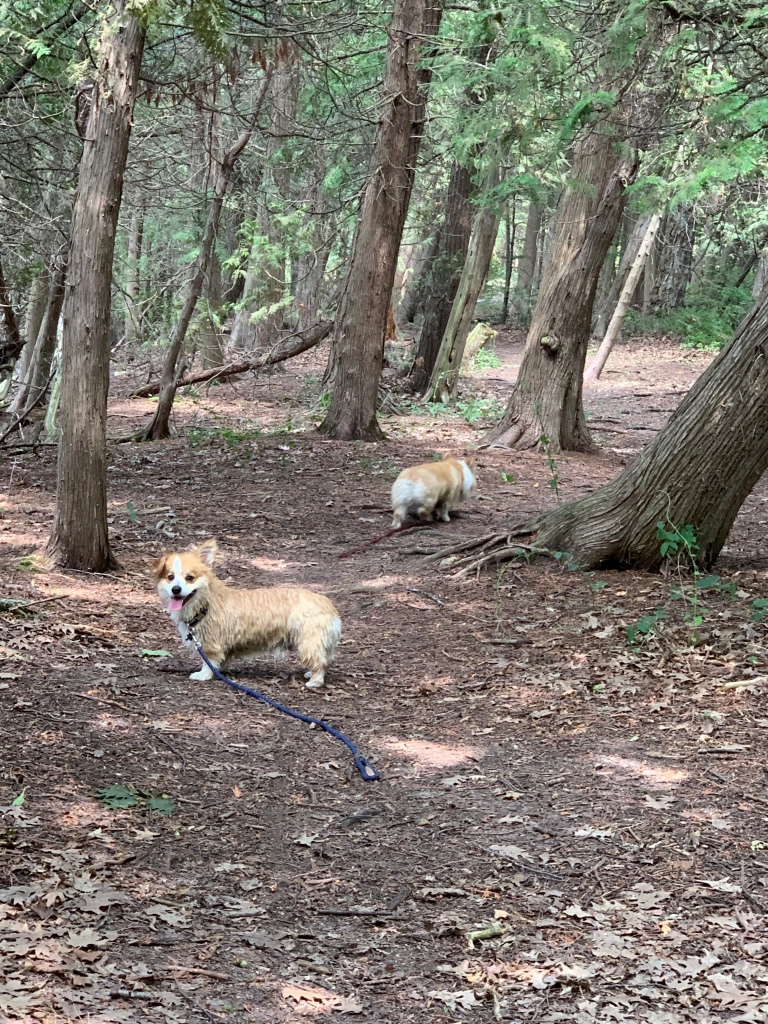 Overall, we liked McRae Point; however, it we were to come back we would want to stay in a different campground. Lake Simcoe is always beautiful but it is very busy using the summer. In fact, there were dozens of boats rafted up about 50 m offshore from the dog beach. At the height of the season, it is probably much busier than we normally like but this was even more pronounced by the openness and lack of privacy of our site.