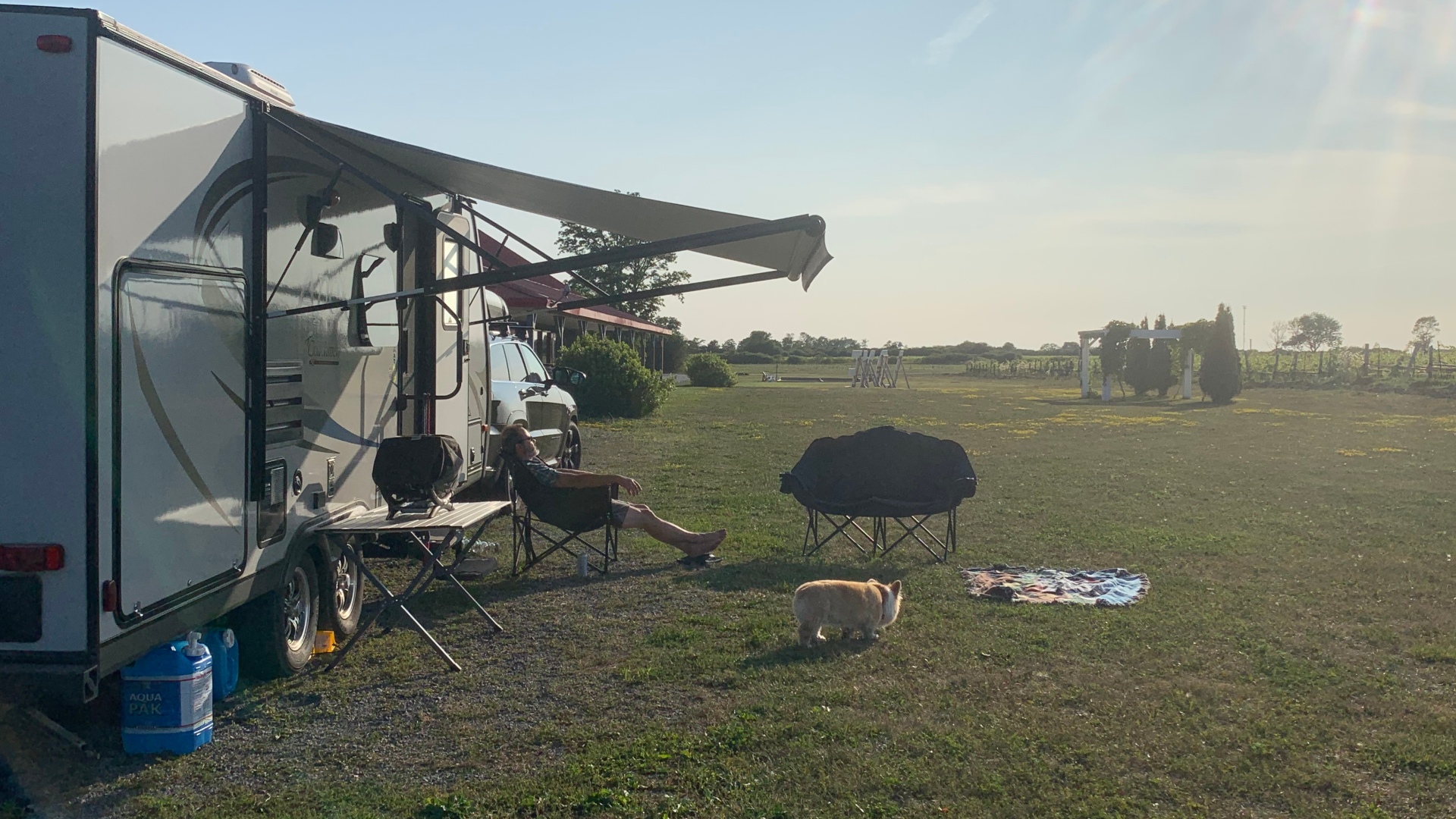 This was our first time staying with Harvest Hosts. It was really lovely. We stayed at a beautiful winery just outside Belleville called Casa Dea. We only stayed overnight because we are on our way to McRae Point Provincial Park on Lake Simcoe. It would have been a 5 hour drive but given that my French training is done and I have the rest of the week off, we decided to leave on Thursday afternoon and break the trip into two days. Obviously, it would be near impossible to get last minute reservations at a provincial park along the way because it is a long weekend so we decided to try Harvest Hosts. There aren’t a lot of places nearby so we had to go abit out of our way but it has been so worth it.

We left on Thursday afternoon around 13h00. We took the 416 to the 401 with the intention of staying on the 401 until Belleville and then turning south towards Lake Ontario. En route, we decided to turn off early and follow the Loyalist Parkway (highway 33) along the lakeshore. It was a good decision! The drive was beautiful. We also had the chance to take a free ferry that travels between Glenora and Adolphuston. 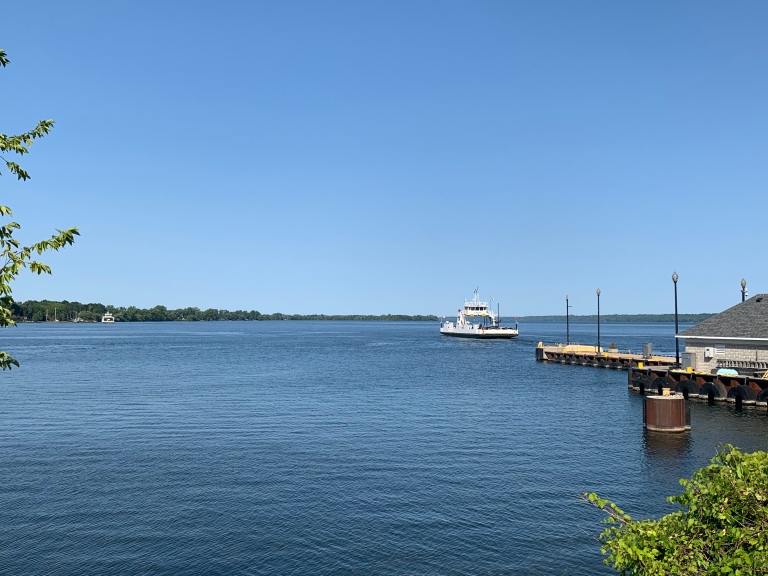 It was a nice treat. We really enjoyed the little towns along the way, especially Picton. We will definitely come back and explore more of the region. We have reservations at Sandbanks in a few weeks which will give us the chance.

We arrived at Casa Dea after it had closed. We parked behind the banquet hall as instructed and set up. We were the only people here for several hours. Later a young family from Quebec pulled in. They were on their first day of a year long RV trip! It was their first night with Harvest Hosts as well.

Set up didn’t take very long as we were only setting up the trailer, transferring stuff to the truck and putting out the table and chairs. 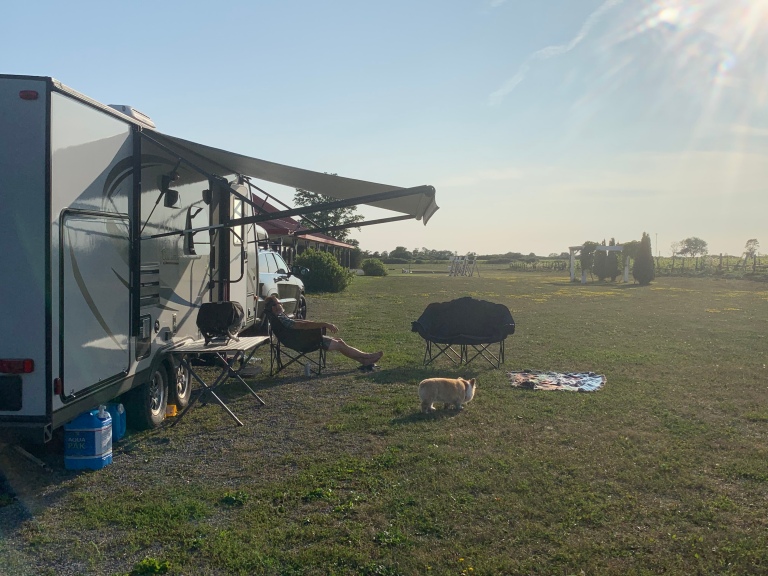 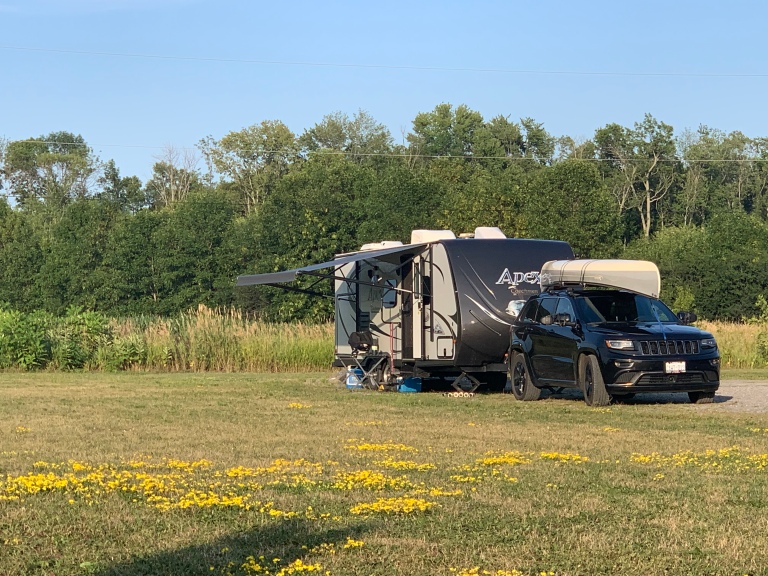 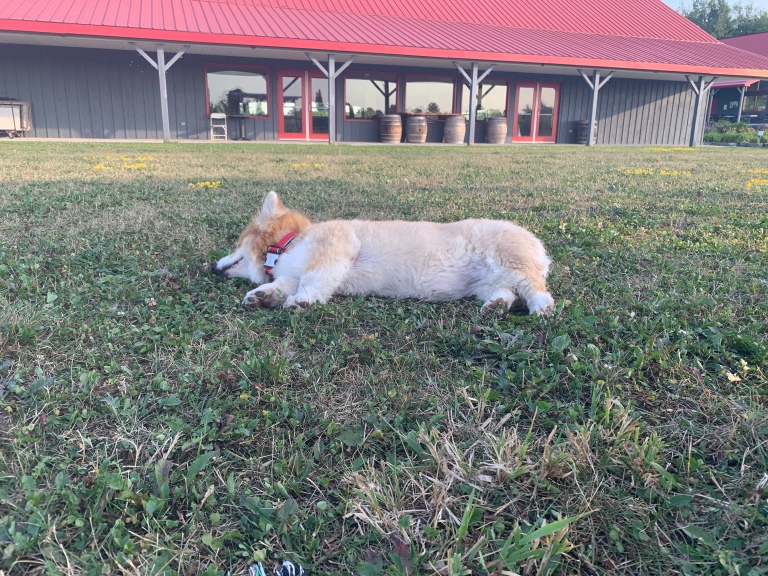 We were able to sit and relax for while before supper. Dinner was barbecued jerk chicken and salad. Unfortunately, the jerk sauce was waaaaayyy too hot for us so we didn’t eat much and ended up throwing out the left overs because we knew we would never eat it!

After a quick post-dinner clean up, we took the dogs for a walk through the vineyards. They have done really well and spent a fair amount of time off lead. They did well with the neighbouring dog as well. Marvin managed to get lost in the dark briefly which was a concern given that we saw rabbit carcasses that were clearly a result of foxes or coyotes! In any event, we got him back.

We weren’t able to spend much time outside after dark because the mosquitos were fierce. I don’t think I have ever seen so many mosquitos at once and they were hungry. There was a veritable cloud of them around the front door after we went in.

That said, it was super quiet all night. An adjacent farm was spraying all night but that just provided a bit of white noise in the background. Not that it was needed, because it was wonderfully silent.

I got up around 06h30 and let the dogs out. I was able to sit outside quietly with my coffee while the sun came fully up. Our neighbours came out around 08h00. The father was quietly enjoying his morning coffee with their dog when three vehicles pulled up. They were the first of about 20 vehicles that parked here to go for a bike ride. It appeared that they were a seniors cycling club.

We took the dogs for another walk through the vineyard before going to the store to buy some wine. We bought a Cuvée, a cabernet Franc riserva, a chardonnay and a chardonnay riserva, a gamay and a blend called Desiderio. So, for $130 we got a place to stay and ½ dozen bottles of wine. Nice!!!

We will be getting on the road shortly to move on to the campground. Overall, this was a great experience and we are looking forward to doing it again. I think next year we will spend more time exploring the Harvest Host locations on the weekends because we will have stayed at all the campgrounds within a 5 hour drive of home. We will work our way through the remaining provincial parks on long weekends and during our 2 week camping trips in the spring and fall.

Notes: there were a lot of craft breweries in the area to investigate.

There is also an interesting provincial park for day use only called Lake of the Mountain near the ferry terminal.