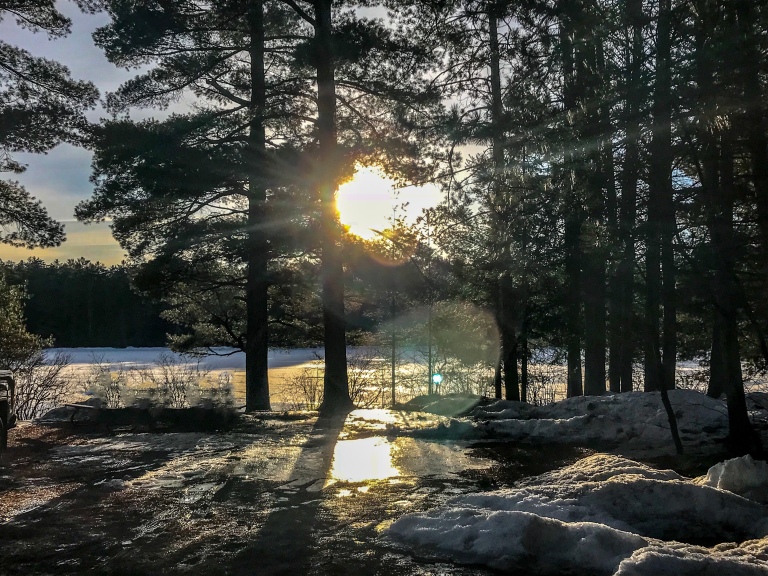 The last rays of the sun at Mew Lake Campground in Algonquin Provincial Park.

Algonquin is world famous for its camping, canoeing and trout fishing. Accordingly, it can be a very busy Provincial Park. While there are people at Algonquin all year round, people are incredibly respectful of the silence that comes with winter camping. There is a tranquility and serenity that summer does not enjoy.

Last year at this time, we were car camping with a tent at Algonquin.  As far as winter camping goes, even if the temperatures weren’t as cold as this year, camping in a tent in April at Algonquin was COLD. (I will link to that post when I have it written retroactively!) Now, with Coccinella — our 25 foot travel trailer — we are hardly roughing it.

We arrived at Mew Lake Campground in the dark at the height of a snowstorm at about 10:00 pm on Friday night. While we had experienced some rain and snow on the drive from Ottawa, our trip slowed significantly as soon as we crossed into the park at East Gate. Low visibility due to heavy snow causing whiteouts resulted in a dramatic drop in our speed for the last 30 kilometres of our trip. This was the first time that we had towed our trailer through truly winter conditions. While we had to drop our speed to about 20 kms/hour due to lack of visibility, towing was not a problem. Frankly, given the conditions and poor visibility, we would have dropped our speed even if we weren’t towing 25 foot travel trailer that weighs more than 5500 pounds.

A. is a wizard at parking large vehicles. It doesn’t matter the restrictions on the space or the vehicle he is driving, he can park on a dime. Tonight was a bit more challenging than normal, though, so he had to get out of the vehicle a few times to get a better sense of the lot and where he was going to park. It was so dark and snowing so hard that it was difficult for him to see me waving my little headlamp as I tried to ground guide him. He will be glad when the weather improves enough that he can install the wireless backup camera on the trailer. I will write a review to detail our view on the camera and its installation once it is installed and we have put it through a few trials.

It was cold. Very cold. So cold that we decided not to use Coccinella’s water system for fear that it would freeze and we would end up with burst pipes. Nighttime temperatures dropped to about -13c degrees and we woke up to a 10 cm blanket of fluffy white snow. The campground was silent. It was divine.

Mew Lake Campground is the only campground in Algonquin Provincial Park that is open year round. There are 33 reservable sites (all of which have electrical service) which can be reserved here. The remaining sites are available on a first come, first serve basis, including those in the Radio Free/Dog Free area. We stayed at Site #51 because it had electrical service and was on the lake.  It was very big and could easily accommodate a much larger trailer.  Of note, only the reservable sites will be regularly plowed all winter.  The others are plowed when time permits for the limited winter maintenance crew. Also, the only source of potable water during winter months is the comfort station.  And several international travellers were very surprised to find that the sanitation/dumping station was closed during the winter but visitors should understand that water pipes cannot be left without a heat source during harsh Canadian winters.

There is one heated comfort station with showers, bathrooms and laundry facilities. The facilities are clean and well maintained. There is wood and kindling available at the campground office. The campground installs and maintains a small skating rink over the winter months. There are no stores open in the Park during the winter. Coming from Ottawa, there are grocery stores in Eganville and Barry’s Bay and a smaller store in Whitney immediately before East Gate.

We have discovered that the honour system is alive and well at Algonquin in the winter months. Don’t worry if the office is closed when you arrive to register and need to pay or purchase wood. Just show up the next morning when/if it is open and settle up for your wood or lot rental. And if the office doesn’t open during your stay, the park maintenance guy will stop by and you can make all the necessary arrangements and payment with either the West or East gate staff over his cell phone.

Gear Reviews:  We have no specific gear reviews for this trip; however, we recommend replacing the factory installed ‘dumb’ temperature control in your trailer with a digital thermostat. We installed an inexpensive Honeywell Digital Thermostat that we purchased on Amazon but could likely be found at any hardware store. It’s not going to make you any warmer but it makes it easier to regulate the interior temperature.

Tips: Winter camping requires preparation and foresight, including during set up.  A. had the presence of mind to not use our plastic chalks directly on the snow and ice. Instead, he put down 12 inch lengths of  1×6 wood that he keeps in the trailer.  That way, when they had frozen solid into the ice, he was able to knock them loose with the back of an axe without worrying about them shattering in the cold as the plastic ones would have.  A. was also careful to position our electrical hookup in ways that it wouldn’t get frozen into ice. (We saw many mats left behind because they were frozen into the ice and people lugging buckets of hot water as they tried to retrieve their gear that was frozen to the ground!)